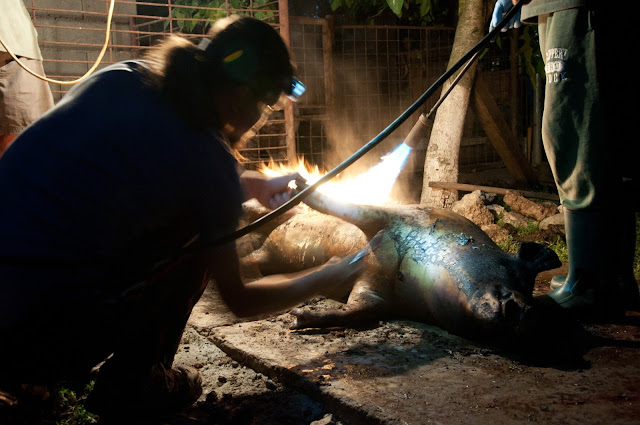 This is a long-lasting tradition in Romanian culture and a few other cultures in East Europe. Seams it's dating isn't really known but it starts long before Christ was born. Must admit it: that is OLD.
There were loads of superstitions and customs surrounding this festivity but the main part of it is that it is a moment of gathering with family and friends, doing some work and have a real feast, letting go of the year that's coming to an end and embracing winter and family.

*NOTE: Rough images will follow and descriptive text, not recommended to the faint-hearted.


should be finished before darkness arrives (just to make sure the evil spirits are kept away) but also in order to have a good feast at the end of the day: nothing is missing, wine, palinka, sausages and a good fresh pork meat stew, depending on the area; in some regions it's boiled meat chunks with pickled boiled cabbage, in others it's a classic stew, or simply barbecues of the fresh cut meat.
There's nothing as tasty as a freshly cut meat cook within the first few hours after it was cut. 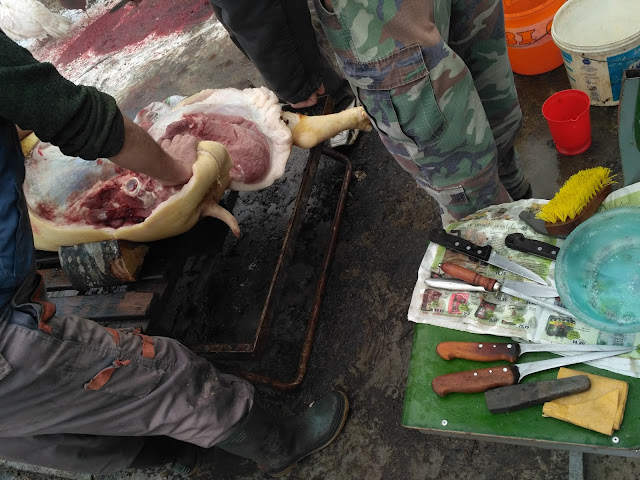 Anyway, back to cutting the pig: early at dawn the man gather, get a quick coffee and a palinka shot and get to work: sacrificing the pig. Depending on their experience this will be a fast thing or a very loud chase taking more time. But usually an experienced person will be the one to actually sacrifice the pig, so that his passing is fast and painless (and as silent as possible).
From there it all starts: flaming the hair, cleaning the skin, and then starting the butchering process. 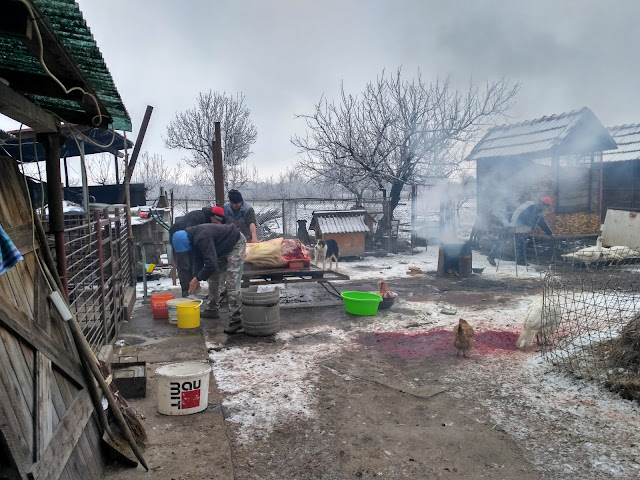 In our tradition, nothing is lost from the pig. Every single piece has it's use and every single part will become a tasty food.
The pig back legs will transform into bacon. The intestines will be cleaned and used to make sausages, the internal organs are also boiled and ground in order to make a kind of sausage called caltabos (which also includes rice). The head, ears and remaining bones of the front legs will become pig's trotters. The skin will be detached with a few centimeters of fat (and sometimes a very thin layer of meat too) attached to it and they are salted and smoked and consumed as well.
Even the blood is used sometimes to make sangerete, similar to the British black pudding. All the meat is portioned and stored for various uses: the front legs' meat is used for grinding in order to make sausages (with a bit of the fat). Most of the fat in the body is separated from the meat and boiled until it melts and can be used for cooking (instead of oil) while the remaining meat chunks from it, called jumari (pig scraps or greaves), get to be fried in the process and will be eaten cold, they are better than the KFC chicken crisps. :)

Superstition has it that kids should be eating the pig's tale (after it's fried), so that there will be a happy year. Also according to superstition the women and anyone who is too pitiful should not stay around when the sacrifice is started, cause if they do, the meat won't taste well. Some writings say that it's also a superstition that after the pig is sacrificed and purged, the children should be dancing and playing there so that the ones who will eat the meat will be eating it with joy and health. 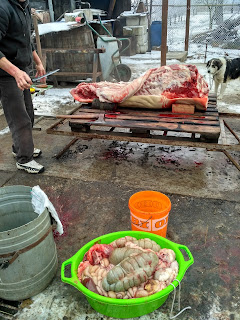 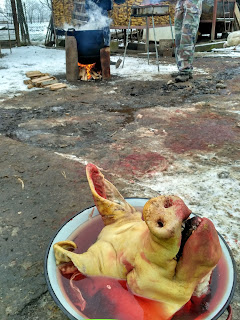 Anyway, there's a lot of superstition in the Romanian culture, most include evil spirits and how to keep them away. The day when the pig is sacrificed is usually done on the day of Ignat (a saint's celebration) on the 20th of December - which is why the event is also called Ignatul Porcului = The pig's Ignat. As in any story of good and evil, there's a counterpart to this saint. Apparently when the night comes there's one evil spirited female part, called Ignatoaia who will take all the well-being of the house away if the boundaries of the property are not sprinkled with the sacrificed pig's blood or smoked with the burned skin. Don't worry, nobody really does this anymore, and the houses' well being is preserved anyway, but it is interesting to mention it nevertheless, as well as another forgotten tradition: to mark the children with a cross on their forehead with a little of the pig's blood. Apparently this ensures them growing up healthy and strong and that they will be protected from the above evil spirit and others wishing them bad. The evil spirits part of superstitions is rarely still maintained, as the feast now has a different meaning: celebrating the upcoming Christmas and the winter, family and friends meeting after a successful year.


I have to say, the entire process is very demanding, involves loads of work, but it's also very much filled of joy, how else could it be with all the palinka and wine involved? :)